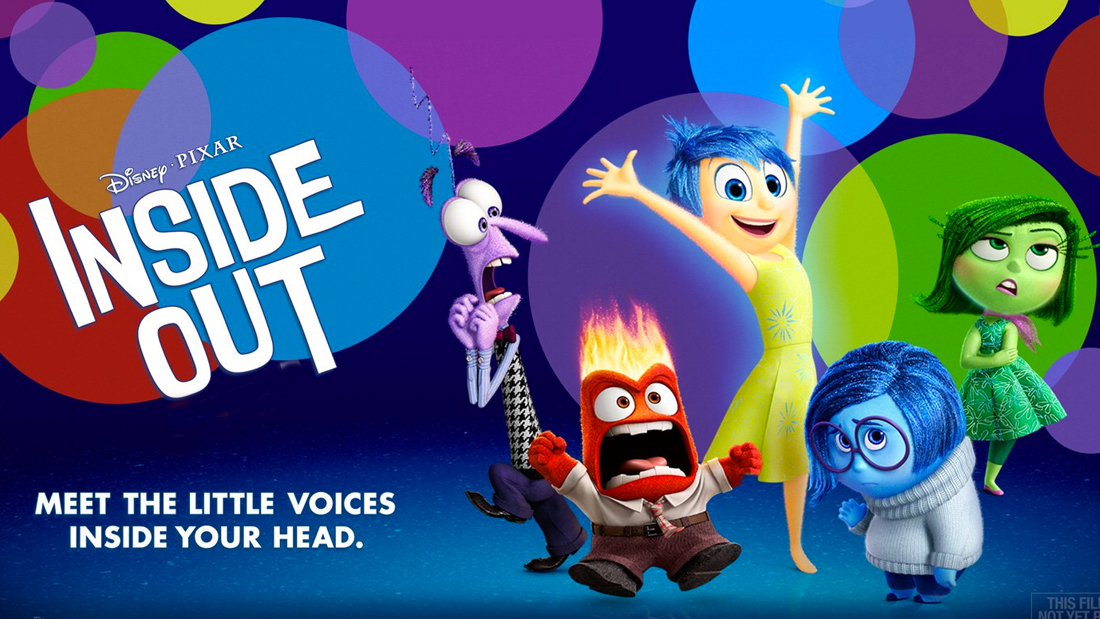 Kid-Sight: Inside Out Movie Review

Parent note: This is a kid friendly review written in simpler language to help explain the movie to children. The purpose is to give a general idea of the movie to help children predict what is happening in the ‘big picture’ of the story. This review also provides some hints about the sensory and storyline content of the movie, as well as some helpful hints for older viewers.

** This review may contain spoilers. The purpose is to provide a full understanding to children of the storyline, particularly to those children who have slower language processing or have difficulty managing unexpected scenarios. Any information given is to be used at the parent/caregiver’s discretion.
Inside Out – 2015 – New Release

Storyline:
Inside Out is a fun, delightful, and ‘emotional’ movie that takes place in the mind of eleven-year-old Riley. Raised in a small Mid-West town playing hockey and hanging out with family and friends, Riley’s is uprooted to San Francisco when her father gets a new job. Riley’s emotions guide her through this journey, as they have throughout her whole life. Joy, Sadness, Disgust, Fear, and Anger are all character-emotions in Riley’s mind and each are separately responsible for their own ‘control’ of Riley based on different situations. For most of Riley’s life, Joy has been in control, making sure Riley keeps a positive perspective on situations and circumstances. Joy doesn’t appreciate Sadness’ responsibility in Riley’s emotions because Joy thinks all sadness is bad.

As Riley’s emotions try to help her cope with her family’s move, two of her main emotions, Joy and Sadness, are accidently transported out of headquarters, leaving Anger, Fear, and Disgust in control of Riley’s emotions. Joy and Sadness take Riley’s “Core Memories” with them into Long Term Memory. The Core Memories are the strongest and most important memories in Riley’s life.

The other three emotions try to help Riley manage the move while Joy and Sadness are absent, but they accidentally cause Riley to distance herself from all the things that make up who Riley is: her silliness, friendships, hockey, honesty, and most importantly, family. Each of these keys to Riley’s personality are represented as Personality Islands.

As Riley alienates herself from each personality trait, the island crumbles and fall into the Memory Dump from which it can never return. Joy and Sadness are trapped in Long-Term Memory and are trying to find their way back to Headquarters, but each time they think they’ve found a way to cross, another Personality Island crumbles into the Memory Dump, leaving them to search for another way.

In the meantime, Riley continues to separate herself from all the things she used to love. Anger devises an idea to have Riley run away back to Minnesota and make new core memories. Once Riley accepts the idea, Fear, Anger, and Disgust realized they’ve made a mistake, but they cannot remove the ‘runaway bulb’ from its spot no matter how hard they try.

Riley steals money from her mother’s purse, causing Honesty Island to fall, and then she goes to purchase a bus ticket back to Minnesota. In the meantime, Joy and Sadness have tried to take Train of Thought back to Headquarters, but when Honesty Island falls, the train is derailed and they almost fall into the Memory Dump. Along the way, they meet Riley’s Imaginary friend, Bing Bong, who helps guide them through various places through Riley’s mind. In the process, Joy begins to realize that sadness is an important emotion for healing… and even happiness. She also realizes that emotions can be combined and not always separate.

Family Island, Riley’s final personality island, begins to crumble as she boards the bus for Minnesota. Joy sends Sadness out toward headquarters on a cloud and then creates an ‘Imaginary Boyfriend’ ladder to meet Sadness’ cloud. Eventually they make it back to Headquarters. It takes Sadness to remove the “runaway idea bulb’ from Riley’s mind. Riley runs home and finds forgiveness and healing with her family.

A new personality island emerges that mixes Riley’s love and life from Minnesota and San Francisco. A new control panel is created for the emotions…one that is more complex and allows all the emotions to work together for Riley.

Sensory Tips:
This movie is low on the sensory stimulation. There are very few moments of extreme noise or lights. The main sensory component here is on the emotional side. This movie deals with a lot of complex emotions. The Imaginary Friend gives his life so Joy can return to Headquarters.

Storyline Complexity:
The story has a complex storyline. As noted from the movie overview, the story deals with big emotions related to a child trying to deal with the difficulties related to a move. Its look at the complexity of how emotions control behavior is also complex.

It is also endearing, leaving many teachable moments about honesty, forgiveness, talking about your emotions, and the value in the complexity of all the emotions.

Note: This movie is a fantastic resource for clinicians who wish to teach about emotional regulation or social thinking. The options are endless!

Schedule your infant, child, and teen for an evaluation today and see how a therapist can help your family.
Call (828) 398 0043 or click on the schedule button.
Schedule Today
Kid-SightAutismKid ActivitiesSensory Sensitive Movies Share On