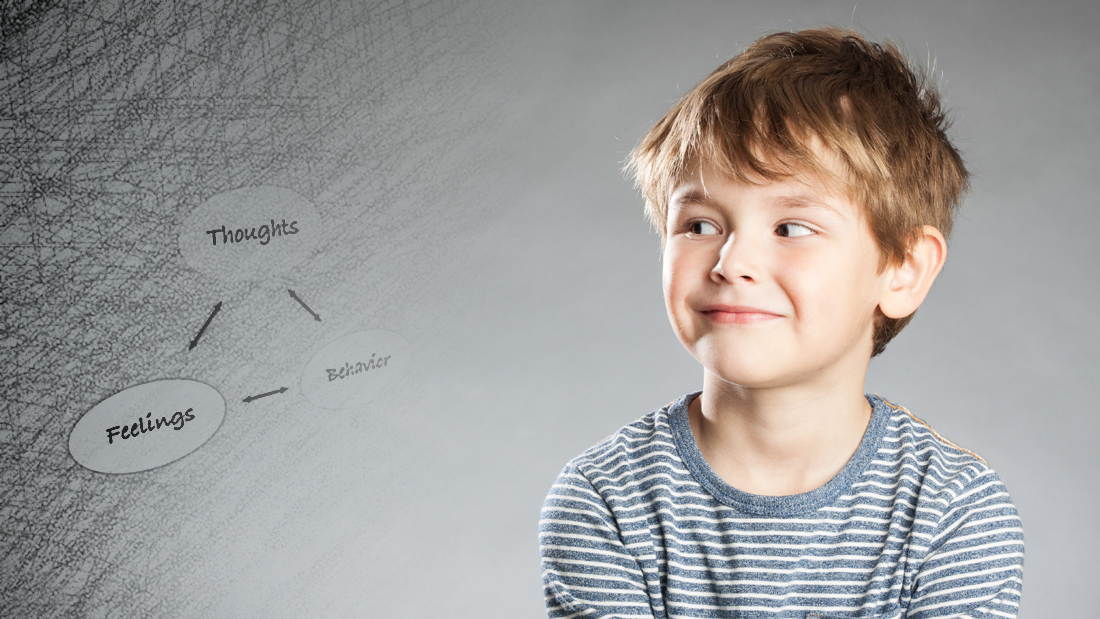 Don’t Believe Everything You Think

The Connection Between Our Thoughts, Feelings, and Behaviors: Part 2

Ever seen that bumper sticker that says, “Don’t believe everything you think?”? Well, it’s true! You shouldn’t! Actually, you probably shouldn’t believe everything you think, feel, or see. Our thoughts, feelings, and behaviors are constantly changing, and not always in a positive way. Kids also have this problem. They believe all their thoughts and feelings, which can lead to some pretty negative experiences and behaviors. In this second article in our CBT series, we’re going to look at some ways to change that!
For a moment, think about a recent event or situation that made you or your child have a strong reaction. An example would be Caleb, a 9 year old, whose parents just separated. Caleb knew his parents were fighting a lot, but when they announced they were separating, Caleb began throwing his toys (behavior) and reported that his stomach was hurting (a somatic feeling). When his parents approached him at a later time, they asked him what he thought about them separating, and his reply was, “It’s my fault” (thought).
In the CBT model, we always have thoughts, feelings (emotional or somatic), and behaviors. Another way to put it, you’re always feeling, thinking, and doing. You can’t have one without the other two. While it might be difficult to identify one of them, you can be sure that it is there! Here’s a great way to think about it: 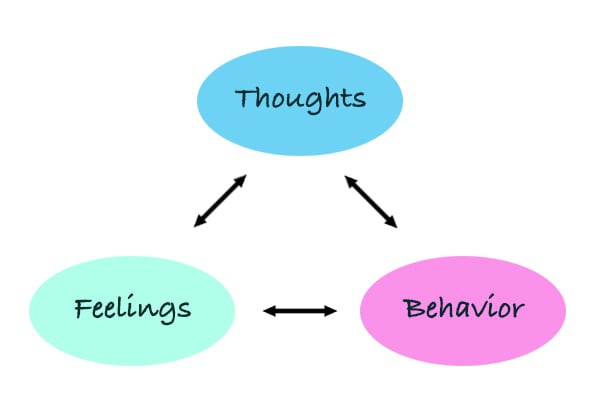 Since they are always connected, when you change one of them, you change the others. Our goal is replace those unhelpful or inaccurate thoughts/feelings/behaviors, which cause us to feel bad, to ones that are more helpful or accurate.
So in the case of Caleb, a therapist using the CBT model might assist Caleb in challenging an unhelpful thought, feeling, or behavior in the CBT triangle by:

In most situations, the child will be able to challenge or disprove their negative thoughts. As they do this, a therapist, parent, or adult then can partner with the child to replace the negative thought/feeling/behavior with a more positive and accurate one. In the case of Caleb, Caleb’s therapist attempts to help him see that he has no reliable proof that he caused his parents’ divorce. Instead the exercise may help him to remember that his parents explicitly told him that it had nothing to do with him. Instead he replaces the negative thought with a more accurate one, which might be, “This was my parents’ decision, and did not have anything to do with me”. Thinking this new thought makes him feel less angry and sad, and he communicates that he feels better.
Changing our thoughts, feelings, and behaviors takes time and practice. During the first few times, negative thoughts, feelings, and behaviors may feel instinctual and irrefutable. Therefore, it may be helpful to get a trained professional to help and assist your child in learning these helpful strategies!
In part 3 of our CBT series, we’ll take a look at unhelpful patterns in our thinking. By knowing what you or your child’s unhelpful thinking patterns are, you’ll be equipped to spot them early on and partner with them to replace them much more quickly! We’ll also take a look at other coping skills that may help in stressful situations. Stay tuned!

Read Part 1: The Connection Between Our Thoughts, Feelings, and Behaviors
Read Part 3: Get Rid of that Stinkin’ Thinkin’

Courtney Bancroft is a Licensed Professional Counselor who utilizes evidence-based interventions to assist children, adolescents, teens and families in achieving their goals and hopes. Her experience involves working with children struggling with anxiety, depression, ADHD, mood disorders, and a history of trauma, among other challenges. She’s an excellent CandyLand player (after being mentored by the hundreds of kids she’s seen) and loves everything outdoors.

Schedule your infant, child, and teen for an evaluation today and see how a therapist can help your family.
Call (828) 398 0043 or click on the schedule button.
Schedule Today
Behavioral HealthBehaviorCognitive Triangle Share On

Get Rid of that Stinkin’ Thinkin’

When Should Daycares Get Involved with Behavioral Health