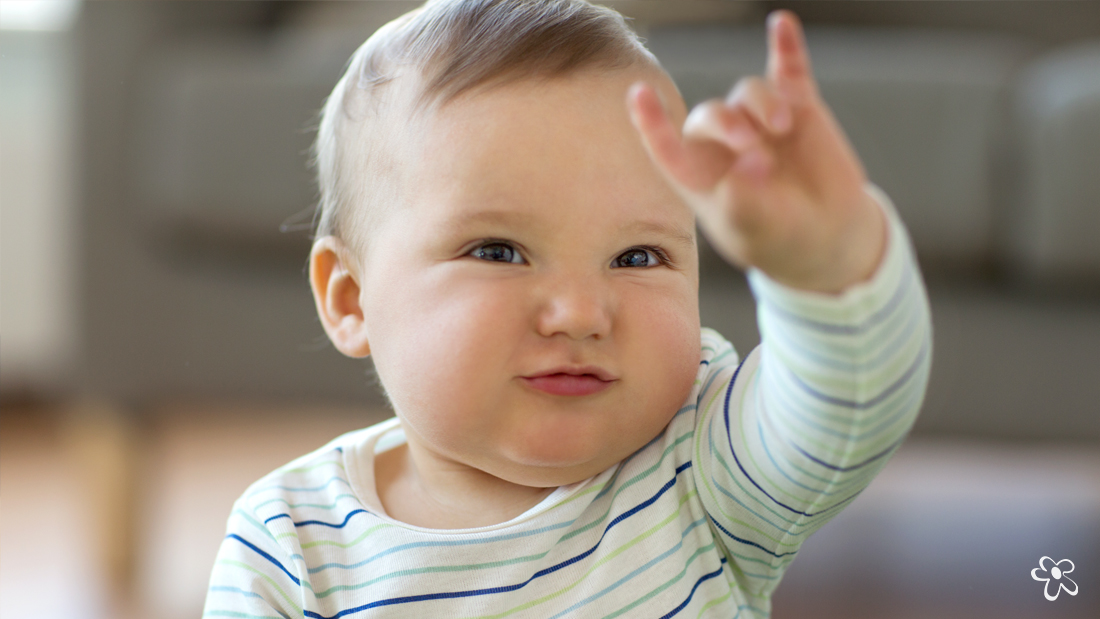 Most people associate sign language as the language of the deaf community. For years, Speech-Language Pathologists and Special Educators have expanded its use from the deaf community to hearing children and adults with other communication disorders and special needs. For example, a child with autism, with normal hearing abilities, may not have the words to communicate his need for a change in an activity or to comment about a favorite book. However, he may be able to use the signs for “all done” or “book” to communicate his message. Likewise, a child with apraxia of speech may be unable to control the muscles of her mouth to form the words to say “I am hungry,” but she may be able to put her hand to her mouth to form the sign for “eat”. A child with a long-term tracheostomy, whose airway is too compromised to use a speaking valve, would have no audible voice. He may need to use gestures or learn sign language as an alternative means of communicating. These are only some of the ways that sign language helps hearing persons with special needs to communicate.

In recent years, research has been conducted on the use of sign language with typically developing, hearing infants and toddlers. Parents and caregivers use various versions of “baby signs” which are modified American Sign Language signs for their infants and toddlers. This use of signs paired with speech has been very successful at facilitating early communication and spoken language.

During the first 3 years of life, the foundation of language is developed. Infants and toddlers learn about the world around them at a rapid rate. At no other time in their lives will they be able to absorb so much information at once. Babies are continuously making those connections that link meanings of the words they hear to the object, person, or action. Comprehension or understanding of language develops long before children are able to speak. Many children point and grunt to communicate. If they cannot yet say the words, they may even take the parent by the hand and pull them to the object they want to comment about. For example, a 9-month-old may not be able to say the word “dog”, but if you say the name of the family pet, she may look in its direction, understanding that the four-legged creature, wagging its tail, looking in at the back door, and fogging up the window is a dog. If taught the sign for dog (panting with tongue out or patting leg), this same 9-month-old could “comment” on the dog at the door, automatically drawing her into the family conversation.

Other research shows that the primary cause of the “terrible-twos” meltdowns and temper-tantrums is frustration due to the parent or caregiver not knowing what the child wants or needs. Teaching your child signs for those things that are relevant to her world enables and empowers your child to be an effective communicator, thus, decreasing the frustration and preventing the tantrum. A good example of this is twenty-month-old Jeremy. Before his mom began teaching him sign language, Jeremy would frequently have temper tantrums before going to daycare. He had a favorite toy, Garfield the Cat which he always took with him. If he showed up at daycare without it, he cried all day until mom picked him up. One morning, Mom was running late and still had to drop Jeremy off at daycare before going to work. Upon racing out the door, Mom forgot Garfield, who was still in Jeremy’s bed. Once in the car, Jeremy realized Garfield was still in the house and frantically began signing “cat” (drawing whiskers on cheeks) and “bed” (hands folded under cheek as if sleeping). Mom immediately realized that Jeremy wanted Garfield and ran back inside to retrieve him. He was exactly where Jeremy said! She had only been working with him on signs for 3 weeks!! Her efforts had prevented a total meltdown because she didn’t have to guess what Jeremy wanted. And, Jeremy had a great day at daycare with Garfield!

Another touching story from the book “Baby Signs” describes a mom going into her 13-month-old’s room when he is crying in the middle of the night. Her child is “blowing” frantically (the sign for Hot), but she notices that the room temperature is quite chilly. She immediately realizes that her child is saying “hot” because he has a fever. Sure enough, she takes his temperature and it is 102.5 degrees! Had her son not known the sign for “hot”, she may have tried many unsuccessful remedies for soothing her son before getting it right!

Many parents have asked me if teaching their child sign language will prevent their child from talking. The answer to this question is no. Teaching your child sign language, whether your child has special needs or is typically developing can help to facilitate the use of spoken language. Using signs with your infant/toddler gives him the vocabulary to comment on his environment, participate in family conversations, express his desire to read a book or for his favorite toy, indicate he needs a diaper change, or tell you he is in pain and where it hurts, long before he actually has the words to communicate these things. People will use whatever comes easiest to them. If the child is able to say the word “cat”, she will not use the sign, because speaking it is easier. Just as children learn to crawl as a building block for walking, children can learn sign language as a building block for speaking.

Acredolo, L. and Goodwyn, S. Baby Signs: How to talk with your baby before your baby can talk. McGraw-Hill, 2002.

Could Your Child Benefit from Speech and Language Therapy?